This is an interview with Josh Malerman, mostly covering his novel, Bird Box. The story, soon to be a movie starring Sandra Bullcok, follows Malorie as her turns upside down. Something is outside her door; if she looks (or allows her children to look), she will die.

Ames: You have said you got the idea for Bird Box from the concept that you cannot fathom infinity or you would die or go mad. In your book, infinity is a monster, personified–you see it, you die. The mind just can’t understand. Is infinity God? In religion, if I remember correctly, man cannot view God or they would die. Exodus 33:20 (God to Moses), But," He said, "you cannot see My face, for no one may see Me and live." Could God be your infinity?

Malerman: This has crossed my mind. But after the fact. Long after writing the book. It’s a fun thing to consider: what if God came to town? In pieces, everywhere, in the form of many creatures, all over the world... all over Riverbridge... up and down Malorie’s street. Could result in something like the book, huh. I’ve been asked before if I thought the book was a metaphor for “not wanting to look out your window cause the ways of the world might drive you mad.” And while that’s totally not what you’re asking here, it’s also fun to think about. But the truth is, I didn’t think of either of those things while writing. So there’s no definitive answer. Not that you want one. But I do like the idea of God... floating down in pieces... confetti throughout the globe... reaching almost everyone... all but the blind and the already mad.

Ames: Out of your many unpublished novels, do you have any that are coming of age tales? Could you tell us a little about that story? Did you place it in your childhood of the 80’s? If not, please write one. I would love to see your take.

Malerman: First off, thank you for saying you’d like to see me write my own childhood. I’m not lying when I say that might be enough for me to go ahead and try it. But the answer is: yes, I have written a “coming of age” novel, two of them, but they don’t take place in the 80s. I don’t wanna give too much away about either because I’m definitely planning on releasing both, but one is about a track team that encounters a really bad thing on a very long run. And the other is about a boy who discovers a chance to rectify the reputation of a girl who is wrongly loathed by everyone around her. He does it by way of crawling, inch by inch, into the past, to the moment things went terribly wrong for her.

Ames: You have said you can’t just sit in front of people and read because that would be boring, and you have some stage fright. Does your stage fright stem from something? How have you learned to overcome that as a frontman for a band?

Malerman: No idea where it came from. But I hate it, that’s for sure. Thing is though, once I’m up there, I’m fine. It’s the build up that kills me. Once I’m rolling I don’t like to stop. Has the band helped? It has to have. We’ve played 2000 shows across the country... sometimes for many people, mostly for not so many. In other words, I’ve gotten up in front of a wide variety of people and crowd sizes. It was pure luck that my first published book happened to include blindfolded people so that when we went to do the readings, the idea of blindfolding the audience didn’t only make for a spectacle, but helped me avoid freaking out. I’m scared of a lot of things. But something I’m discovering lately is... I’m more afraid of being afraid than I am of the actual experience at hand.

Ames: You blindfolded people for The Bird Box. For Black Mad Wheel, you used props, had music, people wore outfits, and your band, The High Strung, played. What have you decided on doing for Unbury Carol?

Malerman: I want full theater this time. As close as we can get. Actors and scripts. Live music and lights. Stage props. Memorized lines. I can still narrate from the side, etc. But I’m hoping we can pull this off. I wanna rent a theater for the release or do it in a bar that has a theatrical slant. I think things were elevated between Black Mad Wheel and Goblin. Each had individual elements of theater that didn’t necessarily overlap. I’d like to do one that includes it all. For Goblin I even acted out the role of Wayne Sherman. My fiancee Allison Laakko played numerous parts, silently, as my friend Kristi Billings narrated. They were both fantastic. But with Unbury Carol I’m thinking the lights go out... curtains part... and the audience is on the Trail with Moxie and Smoke.

Ames: You have said you never looked at books as dollar signs, but always fantasized: Why? What is it about writing and language that brought you to writing, and do you still have that same motivation, almost 30 books later?

Malerman: Don’t know the “why” of it other than to say I was very interested in books early on and have fallen deeply in love since. As goes retaining motivation: I’m about 150K into one book, 18K into another, and I absolutely wanna write this third one, too. So I’m beginning to juggle three new ones as I’m rewriting book two for Del Rey and getting ready for the releases of Unbury Carol (Del Rey, Penguin Random House) in April and On This, the Day of the Pig (Cemetery Dance) on Halloween. I’ve never seen myself as “motivated,” necessarily, as I’ve never entirely needed to motivate myself to get up and do it. It’s pure unobstructed fun, despite the grueling rewrites and the ten times I end up reading my own books on the way to wrapping them. If I need any spark, I just think about what I’d like to do instead. And while I like to do many things, I always return to mapping out the next book, thinking about the current one, and onward we go.

Ames: You wrote Bird Box in 26 days, not plotting it. Have you plotted other novels? Have you found pantsing harder with the longer novel you are working on (or have you finished it?)?

Malerman: Long before I met so many other writers and editors and, really, artists, too, I used to pride myself on not using an outline. Not because I thought it was badass to leap into a book having no idea where it was going, but because in the end it felt like I’d read the book as I wrote it. Which was a helluv an experience. But recently I did use an outline to map out the second book for Del Rey, most of it anyway, and there’s no doubt it helped me. I used to think that an outline was like the shortest story ever. Haha. Like the book was already written, each chapter just a sentence or two. Why expand? But it was nice knowing what was next, and working my way to those moments. So we’ll see. For the next one? We’ll see. But my instinct tells me the big one will continue to be pantsed and this other one I wanna write will be outlined. Let’s keep trying it both ways.

Ames: You are the frontman and writer for the band, The High Strung. You mention being a writer before you became a musician. Since diving into writing music, what do you find to be the most difficult thing about making music, be it an aspect of producing it, writing it, touring, or another reason altogether? Why? What have you learned that helps you overcome that difficulty?

Malerman: I have this fantasy where I’ve already written an album’s worth of lyric sheets so I can just try all kinds of chords and melodies with the existing words. But it never goes that way. Instead, I’m screwing around on the guitar and I end up liking a little thing and then I kinda get married to said little thing and then I find myself trying to find lyrics to fit what I’ve already got started. And while this has resulted in a lot of songs, it’d be liberating as hell to go that other route. As goes touring: sure, it was exhausting but we were playing our songs in a different city every night for something like six years. It was fantastic. And I love recording because 1) you can redo it if it’s weird and 2) I love listening back to the last minute adds, the psycho piano solo you decided to toss in at the buzzer that’s become the song’s most exciting part. I’d say the “difficulties” in writing music are the same ones with writing books. It’s all a matter of sitting down to do it, right? We all know that.

Ames: I love the way Bird Box leaves out much of the backstory and details that other books use, making the pace frightening, the focus on the senses. Did you do this to make us focus on her senses the way she had to? In that world, it would seem you would have little room for reflection, so the style seemed to fit.

Malerman: Again, not consciously at first, but I recognized this was happening early into writing it. At some point I started to tell people I was writing a “slice of life” horror story, in which I didn’t think it needed a backstory or really any resolution at all. I wanted the lights to come on mid-action and for them to go off again the same way. We’re always talking about slice of life drama etc, but is there really a better place for that than horror? The less that’s explained to us, the freakier a freaky situation might become. I’d love to write a movie where unexplained characters carry out a series of really fucked up deeds. And when the credits roll, the audience can talk about what the characters were doing and why. Maybe one person would think they were desperate bank robbers. Maybe someone else would say they were all brothers and sisters. Could be a living Rorschach Test. What do you see in this image? What do you see? There’s a way to do that without it being too abstract to follow. I’m on it.

Ames: You cut a lot from your rough drafts before publishing. Is your style similar to Bird Box, without much backstory, more of a close-up view of the action – in the now? If there was one darling you could bring back from Bird Box, what would it be?

Malerman: It changes with each book. But I do like the close-up PRESTO here we go thing a lot. And if I were to bring back one aspect of the rough draft of Bird Box it would probably be the italics the entire draft was written in. I found it so nightmarish... a whole present tense book in italics... as if the whole experience was simply too gelatinous for Malorie to fully comprehend.

Ames: Thank you for agreeing to do this. I hope people enjoy this interview. 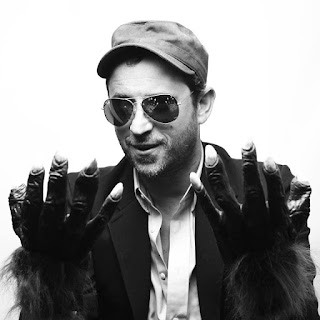 Josh Malerman is the author of Bird Box, Black Mad Wheel, Goblin, and Unbury Carol. He's also one of two singer/songwriters for the band The High Strung, whose song "The Luck You Got" can be heard as the theme song to the Showtime show "Shameless." He lives in Ferndale, Michigan with his fiancee Allison Laakko and their many pets.

Author of BULLETS 'TIL MIDNIGHT, which comes out late 2018 through Stitched Smile Publications. A full review can be found here.

Member of the Horror Writer's Association.